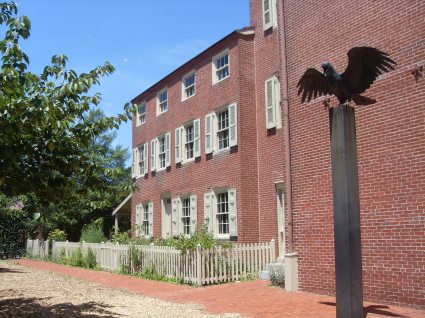 Ever since I found out that the National Park Service preserved (one of) Edgar Allan Poe’s Philadelphia homes, I’ve been wanting to adventure there. Due to the pressing need to do some Philadelphia research (more on this later), we finally went and explored it on Saturday.

Fun Facts about Poe and Philadelphia:

Due to “the lack of primary evidence describing [the interior design] during Poe’s occupancy,” all the rooms are empty and the walls bare, which gave it a pretty creepy feeling, especially in the basement. The only objects in the rooms were photocopies of some of his poems and stories, loose-leaf and scattered on the shelves and in the closets, some strangely out-of-place photocopies of airplane drawings, and, even more out-of-place, this stuffed monkey.

It’s a small house, so it only took about an hour to properly explore and read all the museum materials. I’d definitely recommend stopping in if you’re in the Philadelphia area.

On a side note: after seeing The Raven in theaters a few weeks ago, I couldn’t help but imagine John Cusack wandering moodily around the house.

11 thoughts on “What Does Poe and a Philly Cheesesteak Have in Common?”