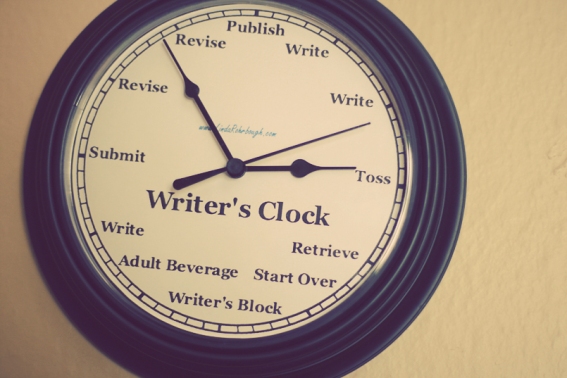 Since I graduated from college a year ago, I haven’t really been able to settle into a routine. Too many things are always up in the air, half-baked plans for new adventures sprout mid-afternoon, spoiling my plans for a writing night in, and for awhile I was commuting three hours a day which consumed any writing time I could possibly squeeze in. When I moved into my new condo, thereby cutting my commute in half and finally being able to organize my very own writing space, I thought I’d be able to get in a routine similar to college, where entire blocks of time were strictly dedicated to each activity–how else would everything get done??–but instead of classes and library time, I’d have hours available to write every day. But still, I’m just writing “when I have time,” squeezing it in randomly.

I thought this whole write-when-I-can plan was working well until I really sat down and budgeted out my time–being as realistic and honest as possible–on a spreadsheet. I was faced with the hard facts that I was really only writing maybe two or three hours a week. Inspired by Lindsey’s recent blog post about finding time to write and her suggestion that you draw up an official writing schedule, I’m going to start doing that. It’ll force me to wake up earlier a few days a week to get an hour of writing in. It’ll force me to adhere to the schedule as soon as I walk in the door after work, rather than plopping down on the couch and letting time slip away, telling myself I’ll get around to it in a few minutes.

With my new schedule, I’ll be writing 14 hours a week. Let’s see if I can stick to it!

19 thoughts on “Making a Writing Schedule”